The internet provider we use went out for a while.  Fortunately the service has returned.  Isn’t it odd that being without the internet felt so strange.  The internet was not that widely used not so long ago.  Is this a good or bad thing?

I hope everyone has a wonderful Christmas.  Whether you are at Church, with family, at work, or alone, this is Christmas.  Thinking beyond ourselves opens up opportunities for creatively and otherwise.  Enjoy this special day.

Even though I am still behind, I continue to play with paper.  (What am I thinking?!) The project is a Christmas paper tree.

My first try in making a small paper Christmas tree:

The tree needs reworking, but I wanted to share it in case someone else is interested in trying it.  The original idea came from TV.  The only example I could quickly find on the internet used sheet music.  The creator also cut the paper differently.  The other tree has more “eyelash” branches.  It is pretty, but for some reason I like these large leaf pattern as branches.  By the way, this paper came from a monthly magazine that was thoroughly enjoyed before I got my scissors on it.

If you make a recycled paper Christmas tree or ornament let me know.  I’d love to see it.

Paper Recycle at Christmas – “I can do that.”

Do you ever see something in a store or in someone’s home and say “I can do that.”?  We never do…..   But this maybe something you will actually do.  It saves money, reuses paper, and helps keep the memories of Christmas alive.

Christmas cards may become something of the past, but a few people still send them.  After Christmas is over, keep the cards that can fit into your smaller picture frames. I encourage you to cull and keep what speaks to you.  Be aware of the size of your frames, but don’t be afraid to trim the cards if necessary.  Below is something I use every Christmas season.  It was a card from a friend. (Thank you Linda.) 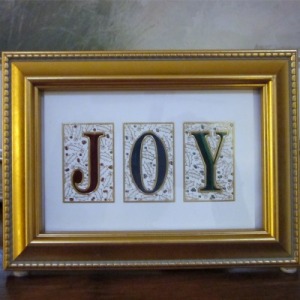 I normally make my pictures  square for this blog, but this rectangle frame doesn’t lend itself to that.  However, this is a good example of how the framing Christmas cards can work for you.

Okay.  Before I go, some of you may say you’ve been doing this for years.  Good!  But we live in such a throw-away society.  There are people who find it faster to just throw away Christmas cards after the new year.  I am hoping there will be people (or person) who says, “Wow.  I can do that.”  Then actually do it!

This is just a short note to all of you who make your own paper bead jewelry.  I’m going to state the obvious.  Christmas is pressing in, whether you are selling your items or making pieces for gifts.  I have noticed that most people looking at my jewelry on etsy are focusing on Christmas-related items.  So if you are putting on the last touches of seasonal jewelry, now is the time to get with it.

Common sense will tell you that if you roll two different size papers, you will have two different size beads. Ignore the width of the two different bead groups below.  This is hard to explain, so I’m going to use straight forward language.  The beads on the left look fatter than the beads on the right.  The green and white beads were made from a mailer that is approximately 8 1/2 x 5 1/2.  The paper on the right was approximately 17 inches long.  The difference?  The left beads were made from heavy paper, the ones on the right are catalog pages.  It is common sense, and I knew this before I started, but it is startling at times.

Then the art comes into play. (And maybe I use the word art loosely.)  The paper I used for the right had Christmas colors.  If I had not taped two pages together before I made the bead, it would have been half its size.  Normally, that is too small to handle and too small to use.  I also chose the order of the paper I glued.

The large beads were harder to roll because of the paper weight.  It also had large white letters, with two red splashes of color.  I had to think ahead.  Where did I want the paper bead to end?  Where will the white letters appear?  I normally plan, and the paper always hands me surprises.  For example I didn’t anticipate the white letters would only be on one side of the bead.  Note: You mark the paper on the wrong side.  That helps with the “surprise.”

That is enough for now.  Below is what happened to some of the above beads.  I’d like to think that it is art. 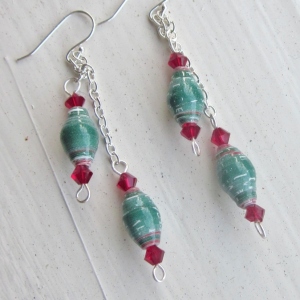